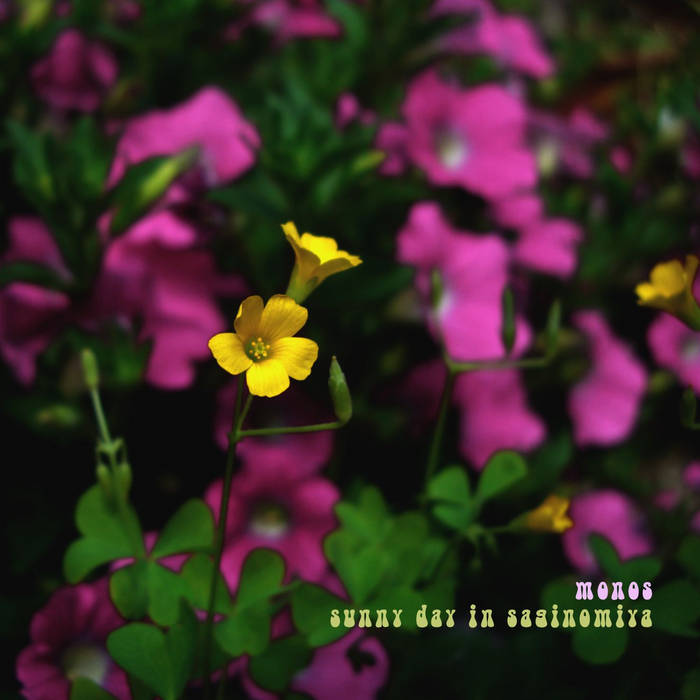 ORIGINALLY ISSUED AS A RUN OF 500 CDs BY editions... AND LONG OUT OF PRINT. THIS WAS RE-ISSUED BY DARREN TATE AS A LIMITED EDITION OF 100 CDRs, a few copies of which are available here.
Review : Over the past couple of years, Darren Tate has been releasing an impressive catalogue of tiny edition CD-Rs for his project Monos, which began as a solo project although more recently has doubled in size with the addition of Colin Potter (who had worked with Tate in the organic drone ensemble Ora). While those CD-Rs go out of print almost as soon as they're pressed, Tate has fortunately allowed other labels access to his recordings for much larger pressings, including the "360 Degrees" and "Nightfall Sunshine" albums for Anomalous and Die Stadt respectively. Edition... (yes, the ellipsis is a part of the label's name) has commissioned Monos for "Sunny Day In Saginomiya," an album as good as any within Monos' catalogue of processed field recordings. Working in Potter's ICR studios (which has not only produced likeminded work from Organum, Jonathan Coleclough, and Andrew Chalk, but also the Dadaist collages of Nurse With Wound), Monos applied thick patinas of reverb and electric synthesis to a set of field recordings provided by another occasional Ora contributor Daisuke Suzuki. The first half of the album couples the reverb saturated field recordings of birds with some eerie spectral guitar drone work from Darren Tate, recalling some of the early Main albums. The second half is far more spartan as Monos works their magic on a Daisuke Suzuki recording of bells, gongs, and rattles occasionally marked by ascending delay patterns and gradually overcome by the analogue electronics found on "Nightfall Sunshine." Quite lovely.